Android 2.2 is now number one

According to Android Developers site, Android 2.2 is the most popular version of the Google OS on mobile devices.

A reported 61.3% of all Android devices are currently running Android 2.2, with 2.1 not far behind.

A more welcoming site is the decline of the 1.x version of the OS sitting at less than 5%.

However, users are still complaining that updated versions of the OS, such as 2.3, aren’t being rolled out efficiently by handset makers leaving devices with older software and missing out on features in some cases. 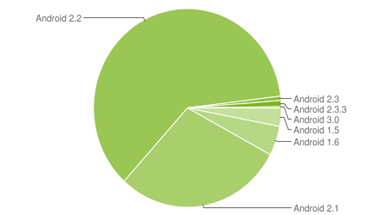