April 15, 2011
From an article by IGN, Activision has confirmed the latest news of the release of a map pack for the Black Ops game.

The first map pack, First Strike, broke records on XBOX Live when it surpassed 1.4 million downloads in the inital initial 24 hours of it release.

The new map pack will first available on XBOX Live, followed by PlayStation and PC. 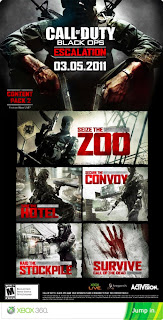 Update (3-May-11):
Check out this preview video from callofduty.com
call of duty game multiplayer xbox