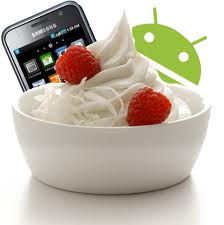 I realize that I am quite delayed with this post, but I felt that I should write something on this seeing as though I own the Galaxy S my self.

I stayed up late working on getting the update down on to the phone via the Samsung Kies software, and a quick Google search you reveal to you that this isn't that easy in most cases as the phone and software hardly connect to each other.

However after about any hour of getting the Kies software to see the phone, I was able to then download and install the must awaited update. My other little headache when doing this update is that the software would only be updated if the phone was fully charged. Apparently 90% battery wasn't sufficient enough, even though the update occurred over a powered USB cable.

Since I had to do a hard reset on my Galaxy in order to connect the Kies software, once the update finished and the phone booted, immediately I noticed some differences. New wallpaper was the first. New icons in the notification bar and more.

Over the last few days of using it, I have come to compare the update to Windows. This release of Android on the Galaxy is much like going from Windows Vista to Windows 7. Some big changes, but generally the experience has just been refined to make it so much better.

Also worth mentioning, there was a shiny new icon in the applications menu. Galaxy s uses received a free Navigation app from Samsung. The Navigon is a free 2GB download which gives the phone voice turn-by-turn navigation. No need for 3G access, the maps are downloaded on to the phone and can be used anywhere. I tested it out on my way to a clients for work and it is on par with any other navigator on the market.

Voice dictation to any text box has been added as well as increased support for Microsoft Exchange. I use Exchange for work and it now supports PIN requirement and forced me to create a PIN for mode phone.

If you have the Galaxy S, I highly recommend you get this update and enjoy the phone even more.
android froyo Galaxy S review smartphone