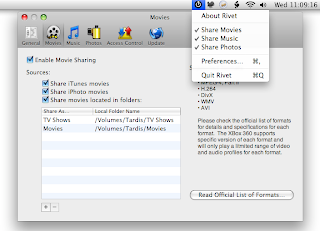 For a while now I have been using Connect360 software on my Mac to connect my XBOX 360 to my iTunes library. This is excellent software and works very well.

However, in my scenario, I do not put my videos and movies in my iTunes and have them stored in separate directories while having no intentions of importing them into iTunes. So began a hunt for some new software, and was successful.

Cyncial Peak's Rivet is very much the same technology as Nullriver Software's Connect360, however I found it better as it allows you to manually define directories where you videos are stored allowing them to be streamed to your XBOX 360. Supporting all the popular codecs (DivX etc.) it works well over Wireless and Wired networks. Security features including the ability to restrict and allow certain IPs and netmasks.

Trials are available where the only restriction are the amount of music and video files able to be viewed per session. However, at the price of US$18, it's well worth just perchasing it and getting full capabilities.

Depending on your setup on your Mac, the Connect360 software maybe be perfect for you and I encourage you to look at both when choosing a solution.