My attempt to say goodbye to Apple and iTunes 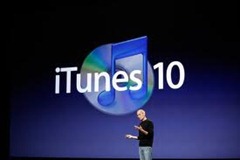 About a week ago, I began to make my Android the centre for all my music and podcasts. But I have since come to learn why Apple has such a hold on the music and portable device industry.

Since I bought my Galaxy S, I have been using my iPhone as, more or less, a iPod Touch. I had it paired with my Bluetooth Stereo in the car and use it to play my music and podcasts while I am on the road for work but last week I wanted to finally finish my transition to the Galaxy and sync my music to it. Here is what I attempted.

My first attempt, I downloaded and installed good ol’ Winamp. I used to use Winamp quite a while ago and remember that it supported device sync and podcasts so i thought I would give it ago first. What I soon discovered is that every time I connected the device, it would duplicate the same playlist unnecessarily. Also, Winamp would copy the podcasts in amongst the rest of my music. So when I went to play music on my phone and hit the shuffle button, I would get a random podcast start playing in the middle of my playlist. And when I went to look for a podcast, for the life I could not find one.

So that soon ended my Winamp experience.

Next I downloaded doubleTwist. I have heard a lot about it from various tech podcasts I listen too and heard that it was a good iTunes clone. I downloaded and installed it and immediately liked the similarity. It was able to detect my Android, calculate and visual capacity usage, sync podcasts and also it had it’s own android app. It was looking like a really good iTunes alternative. One of the other selling features was that you could buy and download music within doubleTwist from Amazon Music. That’s great, however it doesn’t work in Australia. doubleTwist soon also crashed a lot and was slow. iTunes was bloated enough, I didn’t want to move a worse program. doubleTwist was able to solve my podcast issue as it’s Android was able to separate the podcasts from the music however, it was buggy and was slow.

I will admit that none of this was instant. It took both apps a considerable amount of time to configure and I hated every moment. It makes me laugh when applications say that they “support” podcasts and audiobooks, but when you have come from iTunes and go looking for a tab for podcasts or such and it actually under all your other music, that’s not supporting it. That’s the ability to download a file.

So in the end, I will be probably going to get a iPod Touch and going back to Apple. I’m sorry world. I tried.