Apple's iChat is the pre-packaged solution for those who use AOL Messenger, Apple's MobileMe, ICQ and other XMPP-compatible messenging protocols.
Apple's iChat supports text, audio and video across clients for easy video conferencing.
iChat comes pre-installed on every Apple Mac, and is not compatible with other operating systems like Windows or Linux. 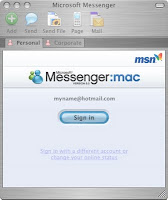 Microsoft's MSN Messenger is a simple program allowing user to chat to those on the MSN network (or Windows Live). This client doesn't not support multi-protocols.

Microsoft's solution for the Mac is lacking features including Audio/Video, but is simple enough for basic chatting and file sharing capabilities. As I mentioned be for, incredibly basic in comparison to the Windows version of the client.

Microsoft MSN Messenger can be downloaded from Mactopia or Apple's Downloads Site. 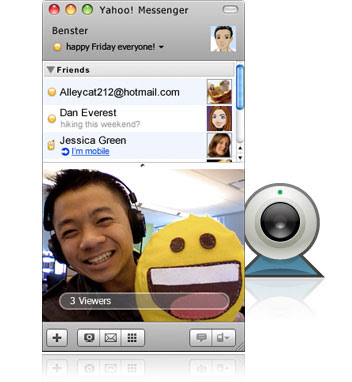 Yahoo! Messenger is feature rich as a native soltuion for the Mac. Yahoo! Messenger allows for only the Yahoo! protocol have does allow for Video Conferencing, chat room interaction and more. For user in the US, you are able to have IM sent to you mobile and also status updates.

The popular VoIP application is also available on the Mac giving it's user all the features found in the Windows version. User are able to make calls, video calls, and basic chat. However, Skype only supports it's on protocol and doesn't allow others.

Mainly for US users, the AOL Messenger allows you to connect with other AOL buddies and only supports text chat, no audio/video. However, this software gives nothing more than what the iChat software already provides.

Aduim is an open-source multi-protocol solution for the Mac that allows users to chat to buddies on a number of networks including MSN, yahoo, AOL, Facebook, Jabber and more. Natively developed for the Mac means that it runs cleanly with the system. No audio/Video capablities.

aMSN is an open-source solution for the MSN network on the Mac. aMSN supports a whole range of features like sound-clips, webcam support, and multiple account logons. No support for multiple protocols, but for those just interested in MSN, this is the client for you. aMSN has builds available for Mac, Windows, and Linux.

Pidgin is a popular multi-protocol client on the Linux system, but now has a port for the Mac system. However, the port is not fully supported by the Pidgin development team and downloading the software seems too complicated as it is not located on the Pidgin website. Overall still a feature rich messenging client.

Mercury Messenger is a Java-based MSN Messenger client supporting multiple logons and other customisable features. Support audio/video only on the Windows and Linux versions. User also have the option to run it from the USB drive.

Fire is another multi-protocol messenger solution offering a range of feature, however the down side is that it is no longer being developed or updated due to lack of developer support. Fire support MSN, Yahoo, AOL and more protocols.

Fire can be downloaded from the Fire Messenger website.

Like this article? Please leave me a comment and let me know what your thoughts are or what can be improved.
AOL apple desktop Internet Java linux list mac messenger microsoft MSN network OS people review skype software websites windows yahoo