May 10, 2009
For the past few weeks I have been using another distribution of Linux called MintLinux.

Mint Linux has been developed of the popular Ubuntu distribution while carrying a few modifications. Mint Linux comes packaged with video/audio codecs, DVD playback, Java and much more.

I am tempted to run through the install process but that's not the focus here. In my opinion, Operating system installs are about the same and asks the same amount of questions. Whether you are installing Windows XP, Vista, Mac OS X, or Ubuntu, if you don't understand hard drive partitioning or can't follow prompts, then it's time you stop trying to be a tech person and do a little more research before you break something.

Once in the operating system these are the things I start looking at:
User Environment

The default environment for Mint Linux is the GNOME desktop environment. This is consistant with the Ubuntu distribution however, the developers at Mint Linux have decided to customise the layout of the desktop enviroment from the conventional GNOME layout. Traditionally, the taskbar is located at the top of the screen, but in Mint the taskbar is located at the bottom just like you would find in Windows or KDE. 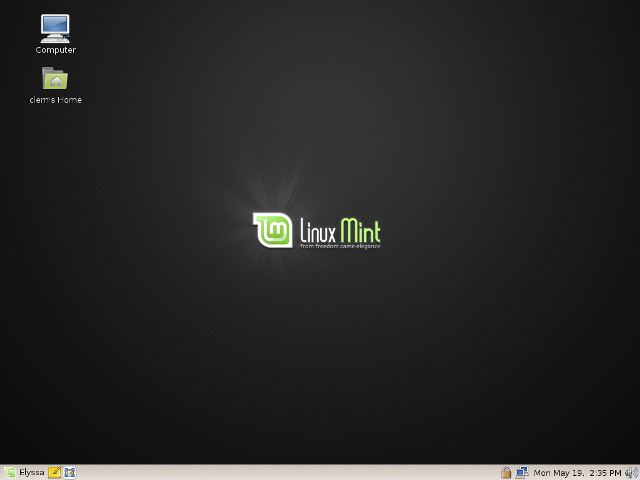 Adding the "Computer" and Users' folder on the desktop is also helpful for when moving to Linux from Windows.

On my particular laptop, all network cards (wired & wireless) were detected and installed during install and driver provided by the kernel.

My wireless network was instantly detected and I was soon connected and online. The GNOME Keyring application keeps record of any network passwords, but the annoying thing here is that during every reboot, you are prompted to enter your set password for the Keyring application before you are connected to the internet. For MS Windows users, this will be confusing and a nuisance since Windows does this automatically.

As most Linux distro these days, Firefox is the default installed browser. Accompanying with it is a slightly customised version of the browser, by which I mean when you do a Google search, you will find that the results page has the Mint Linux logo all over the shop. 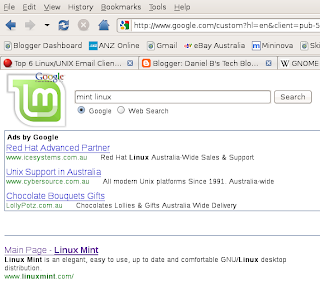 With the email client, again the indurstry standard plays a part here as Thunderbird is the default email client. Strangly the popular Evolution email client is a optional download.

Both versions of the programs are old versions thanks to the age of the release.

The office suite of choice is the popular OpenOffice.org office suite. Unfortunately, the suite released on the CD is out-of-date, and in my attempted to update it, ended in failure. The package manager does not register a new version available nor does downloading a new version from the OpenOffice.org website allow you to easily upgrade the software. The deb package does not run properly even though Mint is a derivative of Debian. The manual package also doesn't run properly.

Despite being an old version, it still works fine.

One of the primary features of Mint Linux is that it comes pre-packaged with Video and Audio codecs allowing users to easily and out-of-the-box play Divx video and MP3 audio files.

Pre-packaged are MPlayer and Totem media players. MPlayer is a complex media player with lots of customisable features. Totem is a fine and simple media player, thankfully both of these players support video and audio files.
Rhythmbox is a excellent music player, but I wont review it as I haven't had time to test and use it.

A application called MintInstall allows you to manage, install and uninstall packages available on the CD/ISO. For extra packages, using the Synaptic application allows you to search, download and install addition software packages from the internet. Synaptic also manages dependancies and allows safe package removal.

As I already mentioned Mint Linux comes with some custom packages for customising your Mint Linux experience.

MintInstall - Allowing you to manage software packages.
MintNanny - A parental application allowing parents to ban sites being displayed to their children. Only problem I have found with this software is that it is domain specific and does not block site based on keywords.
MintDesktop - Customising desktop icons, etc.

MintLinux seems to me to be that little bit of an improvement on Ubuntu. It seems to be a little more user friendly as there are more aspects similar to MS Windows, for example, the taskbar is located at the bottom rather than the top like in Ubuntu.

Battery life on my laptop seemed to be improved than Ubuntu, but still not as good as when running on Windows. Hibinating in MintLinux is exceptional and perfectly restored on boot.

Again, I conclude that, although this comes very close, this is not a total Windows-Linux substition. First time linux users will like this distribution and I highly recommend it.