Showing posts from July, 2010
Show all

July 23, 2010
For ages I have been making the mistake of typing 'ls' at a Windows command from my old days learning and mucking around with Linux back in High School. Typing DIR which is the proper Windows Command Line command for displaying the contents of a folder. But I today asked the question, is there some way of getting 'ls' to work in Windows? Answer is YES. This made me very happy and may save me sometime from my mistakes. UTools.com has developed a package call MSLS which performs all the tasks of ls from Linux, only in Windows. Its tops. Go here: http://utools.com/msls.asp
Post a Comment
Read more

July 18, 2010
Connecting to a Windows Share from Fedora was not an easy task at first. Although, in a world where Linux distributions are trying to become increasingly more easy to use, not being able to simply connect to a open Windows network shared folder seems like something that may need some attention. Turns out that the built in firewall block the Samba client software from network access by default. So by default, users cannot access Windows network shares. I found this article written by a blogger named Brad that helped me resolve this issue. Connect To Windows Share with Fedora 11 Before trying connect to a shared folder through the network, you will need to install samba and allow access through your firewall. Fedora 11 does not come with samba and also does not allow samba access through the firewall by default; at least for me. To install samba just run sudo yum install samba, and then after samba is installed, run sudo service smb start to turn on the smb service. The last step to
Post a Comment
Read more

It was Sunday last week that I finally got the shits with my iPhone 3G and decided to get a new phone. Instead of wait for the problematic iPhone 4G, I decided to go with an Android phone. I have heard lots of good things about the Google Android phones, in particularly the degree of customisation that can be done on the device. However, near a week later I have already got myself a major issue with the phone. The issue is if the phone is sitting in a Wifi spot for extend periods of time (hours), and then leave said Wifi spot, 3G connectivity does not return. The phone seems to fail to switch back 3G when it no longer can reach a remembered Wifi spot. Now I have contacted Optus regarding this, and the guy at the store first suggested that I replace my 2 year old SIM card. I was highly doubtful that this would resolve my issue and I was right. Some searches on this issue show that this is a common and wide-spread problem amongst the Android phone. It does seem to matter what
Post a Comment
Read more 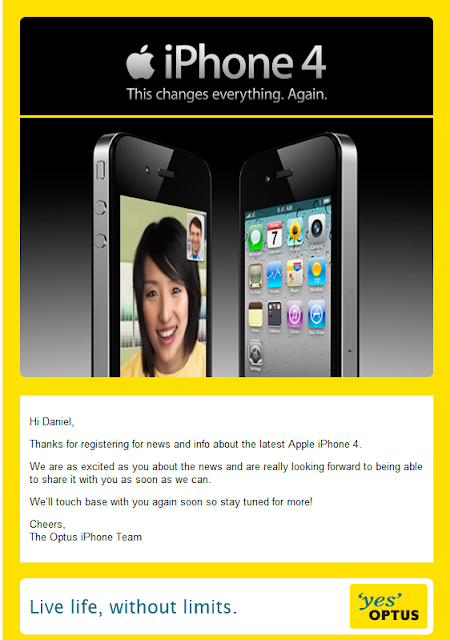 I  received an email from Optus today more or less saying that they will be soon releasing the iPhone 4. Or at least letting us know of a date.
1 comment
Read more

Conroy puts Filter on back burner

July 09, 2010
News today reports that Senator Conroy has delay the implementation of the Internet Content Filtering system. Up til now, Conroy has been campaigning to implement a compulsory internet filter on Australian internet services which would be blocking content under the Restricted Content classification banning content categories such as Child Pornography. The list of internet site was deemed to be kept secret by the government causing outrage amongst piracy and human rights group arguing that legitimate site could be blocked by the government, and possibly censoring extreme views. Industry experts such as academics, ISP experts, political opponents, US government and a wide range of community groups have contested the policy and point out that the Refused Classification sites is problematic in that, for example,blocked RC content could include innocuous material. However today, the Senator announced that the policy of a compulsory internet filter would be delayed until a review into
Post a Comment
Read more

July 08, 2010
Digg.com is rebuilding their popular website. The new dig is allowing users to see what their friend's are "Digging" more easily into a new default view called My News. Also, site and blog owners can setup automatic submition so new article are automatically submitted to Digg.com with one Digg point. At the moment though, the new site is only available by invitation only as it is still in development. For me, I am not excited about the new changes. As I enjoy seeing a great list of what is popular around the internet, instead of what my friends are digging. Check it out at new. digg.com Verification code:  73d6c8bfab0a4644a032bcc7ba2194be
Post a Comment
Read more

In an article by Digital Trends , the major TV makers (LG Electronics, Samsung Electronics, Sony Pictures Entertainment and Valens Semiconductor) are looking to end the AV connectivity format HDMI which has become a standard in the HD TV market for connecting devices for both video and sound using one cable. However, we soon could be using the everyday networking cables to connect our devices. In the past connecting devices meant buying one of many (e.g. S-Video, HDMI etc.) different connectors. Called HDbaseT, the standard uses standard RJ45 cables to connect devices, transmitting data up to a scalable 20Gbps transmission speed. The same connection can be used to also transmit data including internet video and network streaming. See the original article here .
Post a Comment
Read more
More posts