Showing posts from March, 2009
Show all

I have just finished installing Fedora 10 on my HP Laptop and from the old days of me running Fedora Core I naturally ran KDE instead of GNOME, however, I can't get over how large the font is by default. Are they expecting seniors to be running this verision of KDE?
Post a Comment
Read more 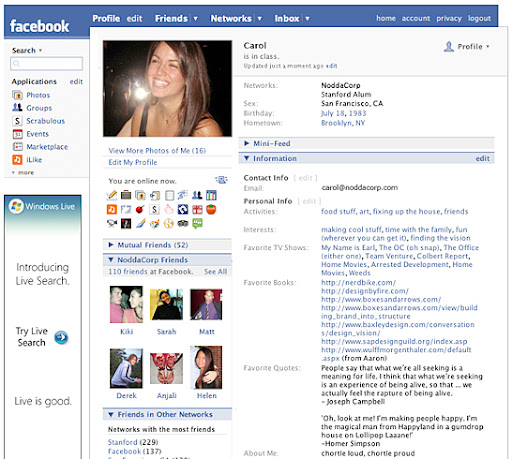 The internet social network has been a fad for some time now and the creators have been loving the success of a site that has taken a simple concept of communication and keeping touch. This is of course, Facebook. The site has always had problems with the public whether it be company/corporate bosses wanting it gone due to lack of productivity from their workers or the numerous privacy concerns of the sites terms and conditions. But recently, the site has managed to anger their users twice in a two month span in a big way. 1) Change in the Terms of Service The changes made in Feburary 2009 to Facebook's Terms of Use outlined that they have total control of any and all content submitted by their users, even after the user closed their account. When this was accounced user made it known to the Facebook owners that they had gone too far. However, the current terms of use still state that Facebook owns and controls all content sumbitted by users. Facebook Term of Use CNet: Fac
2 comments
Read more

Note: I have noticed this page has been trending recently and I believe this to be because of the release of Call of Duty: Modern Warfare 3. This review is of the 2006 Call of Duty 3 release. Please enjoy my review and leave a comment below. Also some edits have been made to correct spelling, grammar and removal of videos. I have been playing this game for a while now and I do realise that it is aged since its release but this is how I am getting to playing these games. Call of Duty 3 is the next advancement of the smash hit First Person shooter WWII games Call of Duty & Call of Duty II. Similarly to it predecessors, you play several characters as you advance through the game in various countries armies to beat the Nazi Germans. This game takes no time in getting right into the action. You being as an American private and you brush up on your weaponry skills by taking out some practice targets. Once this is complete, you move into the back off a troop carrier and get right in
Post a Comment
Read more

For the last few weeks I have been using Ubuntu Linux on my HP Pavilion dv3000 (dv3110tx) series notebook. The question that I have been trying to answer when running Ubuntu this time round was "If I was a non-technical computer user, reasonably new to Linux, would this work for me? Could I make this work?". As I used Ubuntu, since the system is targeted to new users and desktop users, could it be simple enough for people coming from Linux? I, myself, am a technical person and I do have experience with Linux and how to use it and how it works in comparison to Microsoft Windows so I had difficulty letting go of old Linux habits (ie. Using WINE ). I am tempted to run through the install process but that's not the focus here. In my opinion, Operating system installs are about the same and asks the same amount of questions. Whether you are installing Windows XP, Vista, Mac OS X, or Ubuntu, if you don't understand hard drive partitioning or can't follow prompts, the
1 comment
Read more
More posts